I began putting my new Google Calender to use. I walked to Screenland tonight for a showing of Berdella, the Movie. Perhaps you've seen stickers with the menacing man wearing glasses with the word Bobey beneath it. 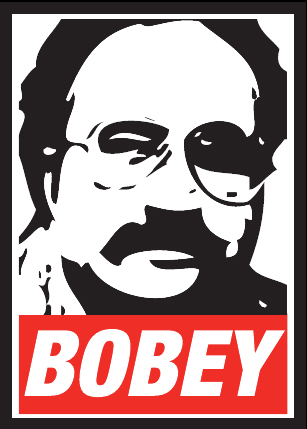 " I talked with the directors of the new movie tonight. They said that no matter what, anything involving Bob Berdella in this city would evoke emotion and controversy. To make a horror flick is what these two directors, who both have day jobs wanted to do. They chose subject matter involving a real looming figure in the not too distant history of Kansas City where there are real people who still remember and still feel the pain of that history, some of whom were in the Screenland Theater as I talked to Bill Taft and Paul South, the creaters of this newest addition to the horror genre in Kansas City. They say Berdella will run through Sunday at Screenland. Showtimes are Saturday, September 26th at 7:00and Sunday, September 27th at 7:00. The website for the movie has everything you need to know and more. I took on some pretense of being a reporter tonight and shot some video, asked some questions on camera and took some pictures. Screen shot of Berdella: the Movie, at Screenland in Kansas City Missouri.

Watch live video from Chrometuna's Super Natural Boloney on Justin.tv
I will see how this works in addition to what I stream on livestream....
Click the on Button to see what is being streamed on Svoboda...


FREE hit counter and Internet traffic statistics from freestats.com
Posted by Stella Svoboda at 21:48 No comments: