We Drive on to Stroud, Oklahoma

The Blue Whale of Catoosa was a peaceful respite.  It is funny how the spirit of a place can live on beyond the lives of those who created it.    The sun was going down, and we still didn't have an idea where we were going to stay for the night.  I wanted to have brunch at the Rock Cafe in Stroud, Oklahoma, so if we stopped anywhere along this area it would be fine.  However, I wasn't able to get much good information on any motels.  Maybe next time I will be better prepared.  We drove into Catoosa.
To get there, we left the Blue Whale, and took a right on Ford Street.  We then took a left on South Cherokee Street, which took us into Catoosa, and past the MKT Depot musuem of Catoosa.  You drive through Catoosa and come to an intersection where you are facing the Hard Rock Cafe.  This road passes under I-44 and eventually becomes S 193rd Street/N 23rd Street.  We stopped at the Quicktrip on the southwest corner of the interchange for Fuel and kawfeee.  We also found the cheapest fuel we would find anywhere on our trip.  It starts going up from here. 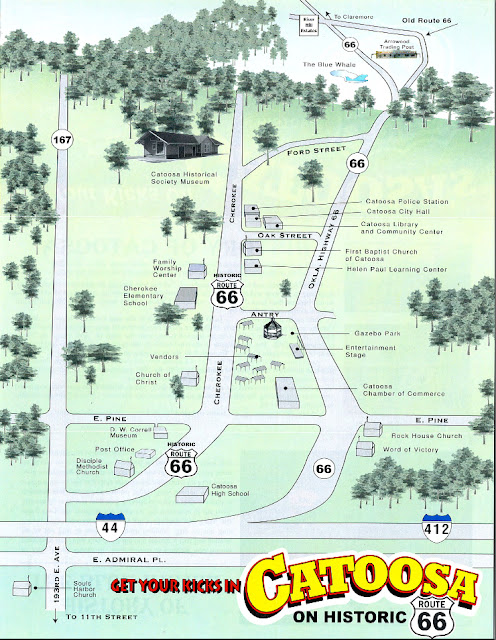 QuikTrip, by the way is our favorite convenience store.  It is always consistant, has a good selection of things to eat, the cheapest gas anywhere, but most importantly -- QuikTrips always consistantly have clean bathrooms.

Friday, October 19, 2012 18:45:25
The interstate highway (I-44) is to the north of you this whole way.  Then it cuves to the southwest, and you pass under it.  I-44 through here also has a secondary route designation of 66.  It was route 66 for awhile in the 1950's.  This part of interstate preceeded the US interstate system by about 3 years.  Oklahoma was one of the first states to build a four lane limited access divided highway when it created the Turner Turnpike through here. 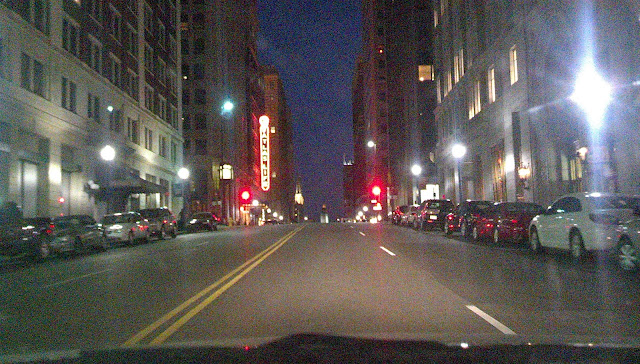 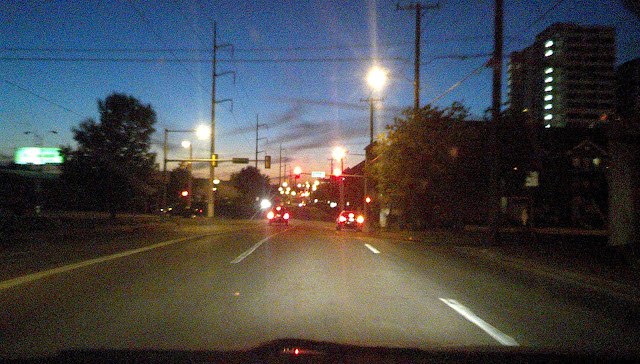 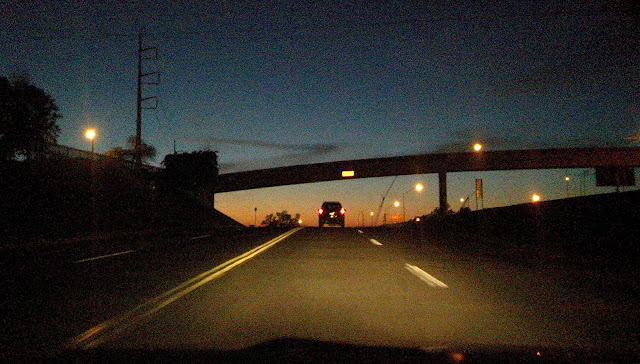 Friday, October 19, 2012 19:22:52
After you cross over the Arkansas River, you will find yourself in an industrial area of Tulsa on Southwest Boulevard.  The road heads south, then bends to the right heading southwest, then bends to the right again at Billy Ray's Bar BQ and Catfish, which seemed to be jumping when we went by, taking a more southwesterly track.  You cross under the Okmulgee Expressway and drive parallel to the Red Fork Expressway (I-244) before crossing under it and veering to the right and passing by Ollie's Station to the right side.  You continue on Southwest Boulevard, which also becomes East 38th Place and are to the north and west of the Red Fork Expressway (I-244).  The road is also taking on the character of an outer road with motels and strip malls.  We crossed under the Gilcrease Expressway which is part of a mixmaster interchange to the east of us.  We turned south as we were beginning to look at our motel options.  There was one mom and pop type motel but it looked like it was turned into apartments.  We tend to want to avoid any place that advertises "extended stay."  There were the usual Motel 6 type places but if we go chain, we tend to gravitate towards Best Western, as we have had good luck with those and they tend to be locally owned franchises with a little bit of history behind them.   I knew when I roughly planned our itinerary that this stretch might be hard to come by a good motel room.  I originally wanted to stay in Sapulpa and explore the downtown a little in the morning before having brunch at the Rock Cafe.  However, what I found advertised on the internets wasn't much in the way of rooms.  We ended up getting back on the route and heading for Stroud.  Our little detour took us on the outer road which is south 55th west avenue before turning north on south 58th West Avenue.  I tell you, the road designations leave a lot to be desired out here in West Tulsa.  Also, the highways came through this area early on (1953), so route 66 has many alignments through here, really, and there is a lot of 1950's era architecture everywhere off the main highways.  If you like old signage and restaurants, Tulsa is a gold mine.
Friday, October 19, 2012 19:31:21
We headed north, then intercepted southwest boulevard and turned left, and headed west towards Sapulpa.  When we first came through here, there were really no signs to guide us, and we swore we went off route.  We even pulled over to consult the maps and guides before finding a hint just shy of Sapulpa that we were on route 66.  It gets worse at night, as we traveled this time around.  There are no lights out here and this road gets really rural.  However, this time, we had the purple line of the garmin to guide us on the route, and we also had our previous experience.  If you take the later alignment to the south, you will end up on the south outer road of the interstate.  Soutwest Boulevard curves to the south and becomes Old Sapulpa road.  One reason this road may not have much indication of the route on it is that it was bypassed early -- probably back in the early 50's.   Thre are also some railroad tracks to the north of the road, which, I beleive, belong to the Burlington Northern Santa Fe Railway.  This road through here, in addition to being known as old State Highway 66, is also knowsn as Frankoma Road.  Frankoma was a pottery factory with interesting history.
Friday, October 19, 2012 19:40:21
You pass the old Frankoma Factory on your left, then cross under I-44 and join up with the newer alignment of 66, which is the south outer road for the highway and is known as New Sapulpa Road.  Here we are in Sapulpa, and route 66 will take a left hand turn at East Dewey Avenue, which will take us into downtown Sapulpa, which is quite pretty.  Someday we will get a chance to get out and walk around here.
Friday, October 19, 2012 19:50:43
Friday, October 19, 2012 19:57:53
Friday, October 19, 2012 19:58:05
Friday, October 19, 2012 19:58:34
There is a short line railroad here, which I find interesting, and we found ourselves waiting on at the crossing into downtown...
http://www.tsurailway.com/index.html
Also, someday, there is a place I make like to try...
http://www.boomarangdiner.com/
Apparently, the Boomarang Diner is a small local chain.

Heading west out of Sapulpa on West Dewey Avenue, you have a choice of an interesting older alignment of the route, which is called the West Ozark Trail.  It being dark, and getting late, we opted not to take it as we wouldn't see much at night anyway.  However, the description of the route is interesting, as you cross over an old bridge and past a the Tee Pee drive in theater.  US 66 continues to the southwest and towards Barstow, passing the small town of Kellyville, Oklahoma and crossing under I-44 one more time.  We had to stop at a gas station in Kellyville, so Suyen could take care of some "bidness."  Interestingly to railfans, yet another shortline railroad is to the south of the highway -- that is the Stillwater Central Railroad...
http://www.watcocompanies.com/Railroads/slwc/slwc.htm

The speed limit was 65 through here, but Suyen thought I was driving too fast doing the speed limit at night.  In the old days, route 66 was considered dangerous in many areas, and there are a lot of ghosts on the highway.  Think about that.

The route curves a few times before you come to Stroud, Oklahoma.  The motel choices were not great.  Some of the local ones were really appealing to us, but the reviews were bad.  So we went for our default, which was the Best Wesern off the Highway, on the north side of town.  I hope we didn't break karma with the road too bad by doing this.  The motel was a good one and was priced right.  It also set me up for a good morning run into town the next morning for my exercise.  On the way in, it being halloween, we glanced over at a building that had a pretty scary looking spider blow up decoration hanging by the doorway.  It was life sized and animated -- the head moved from side to side.  It was actually scary looking at a glance, and amused me to no end.  Suyen was too tired by now to be amused.  Our dog was out of it.  I tried to scare her in with it on our morning run.
Friday, October 19, 2012 20:50:18 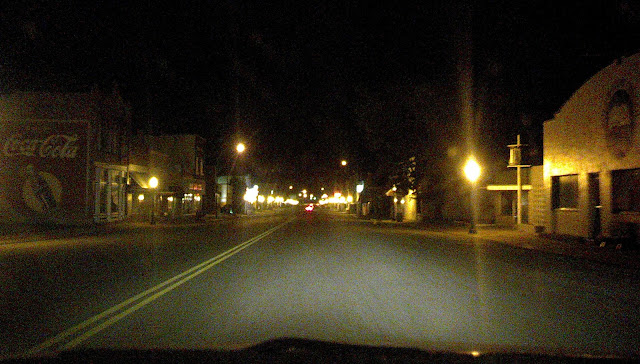 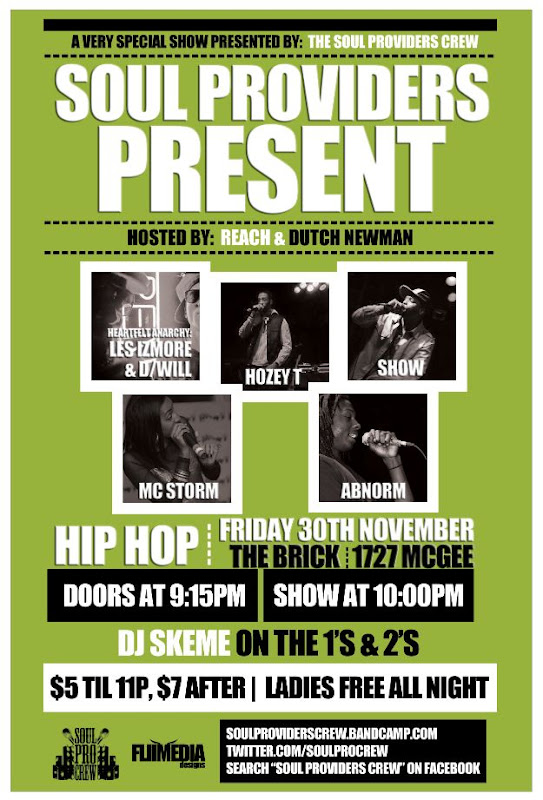 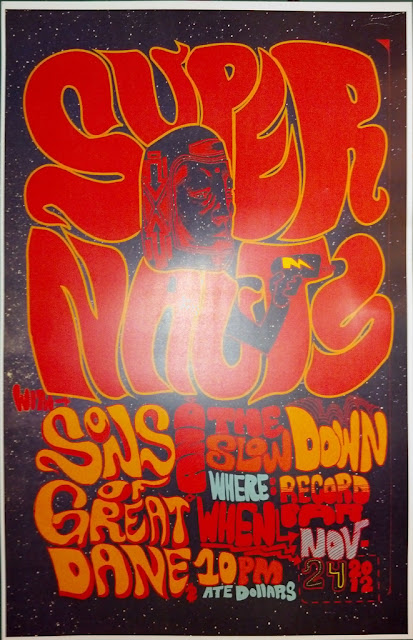 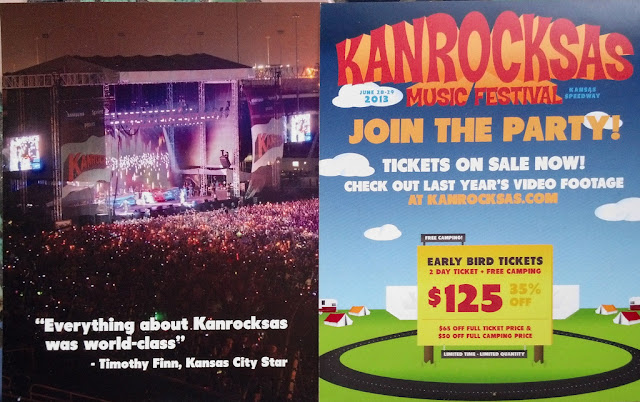 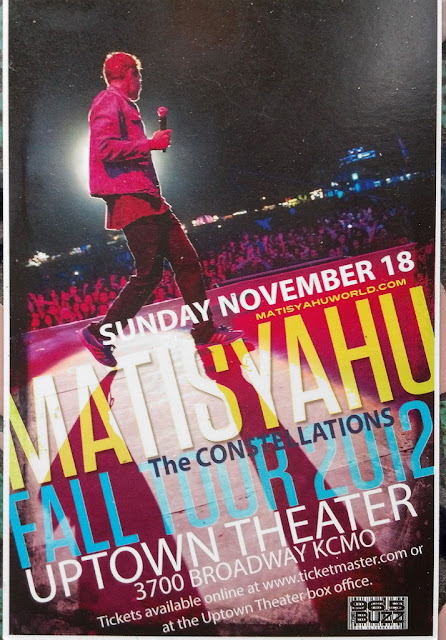 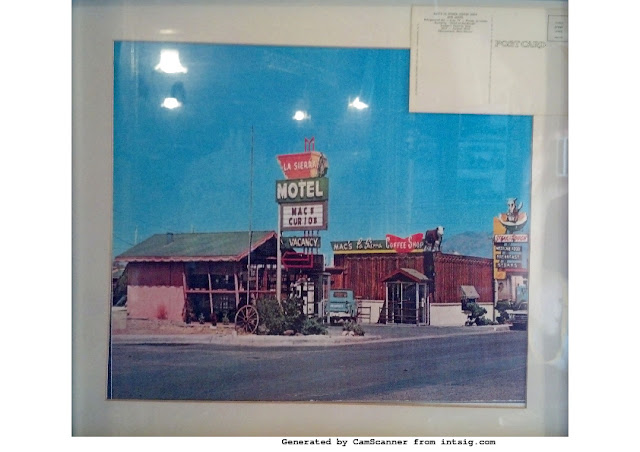 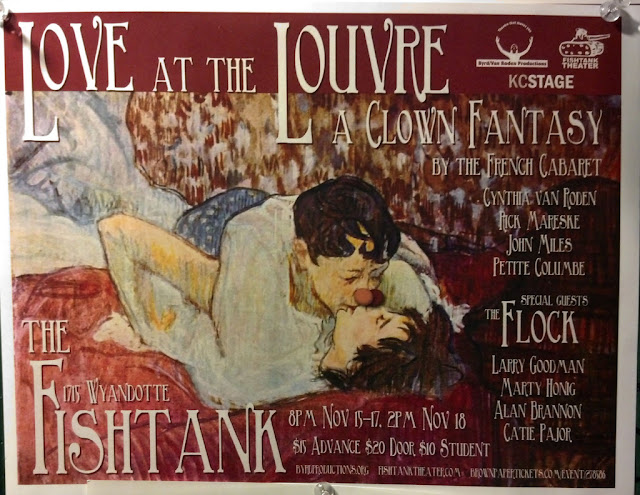 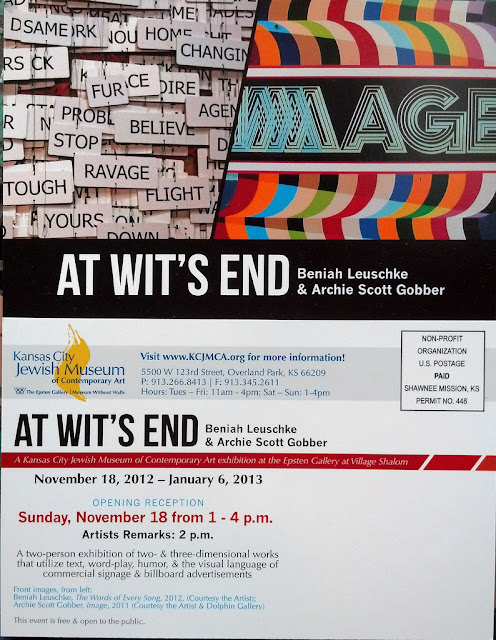 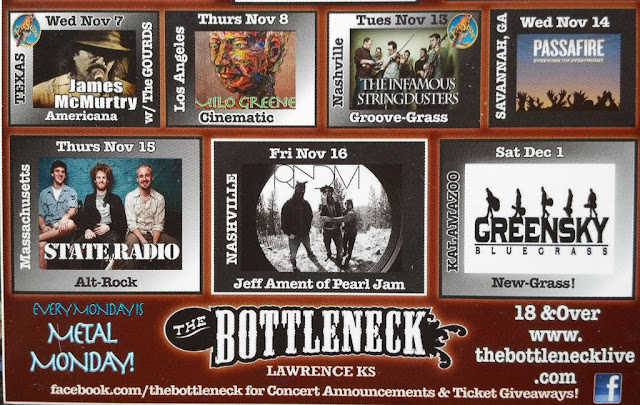 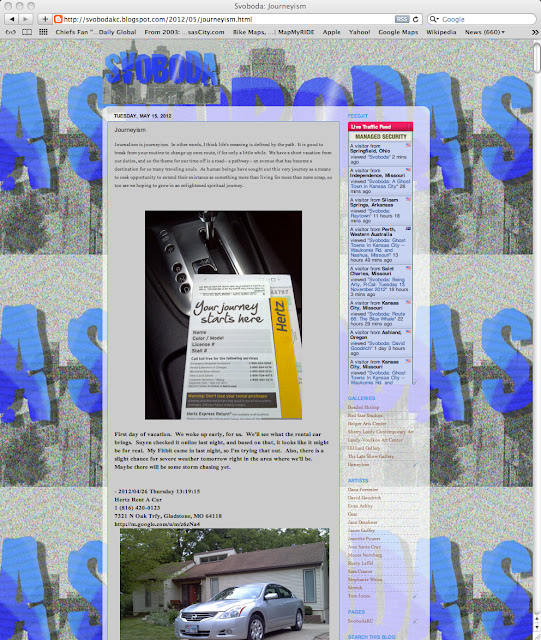 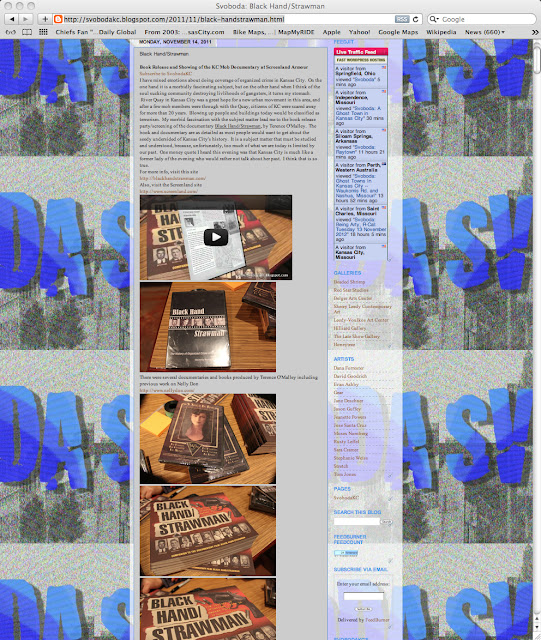 Posted by Stella Svoboda at 19:59 No comments: Links to this post